Home » In-News » ‘Mr. Kejriwal-400 per cent hike in MLA’s salary, but no money for Sanitation Workers’

‘Mr. Kejriwal-400 per cent hike in MLA’s salary, but no money for Sanitation Workers’

0 In-News
A+ A-
Print Email
Congress has asked chief minister of Delhi, Arvind Kejriwal that  is it not true that on the one hand sanitation workers, teachers and nurses have not been getting their wages for the past many months, but on the other hand, a Bill was passed to give a 400 per cent hike in the salaries of the MLAs, to make the salary of each MLA Rs 2.60 lakh per month?

Congress has asked Kejriwal that  in 2013, after meeting Anna Hazare, you had announced at Rajghat that your MLAs would take an honorarium of only Rs 25000 per month. 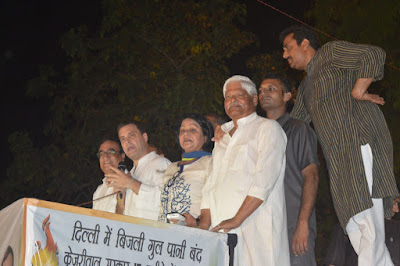 Kejriwal Ji, is it not true that you had passed a Bill to give car loans of Rs 12 lakh to each MLA so that the MLAs could buy two cars of Rs 6 lakh each of odd and even numbers? Is it not true that the Bill passed to give salary hikes to the MLAs also included travel allowance of Rs 3 lakh to each MLA for travel inside and outside the country along with family members?