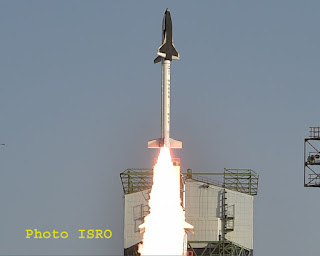 From that peak altitude of 65 km, RLV-TD began its descent followed by atmospheric re-entry at around Mach 5 (five times the speed of sound). The vehicle’s Navigation, Guidance and Control system accurately steered the vehicle during this phase for safe descent.

After successfully surviving a high temperatures of re-entry with the help of its Thermal Protection System (TPS), RLV-TD successfully glided down to the defined landing spot over Bay of Bengal, at a distance of about 450 km from Sriharikota, thereby fulfilling its mission objectives.

The vehicle was successfully tracked during its flight from ground stations at Sriharikota and a shipborne terminal. Total flight duration from launch to landing of this mission of the delta winged RLV-TD, lasted for about 770 seconds.

In this flight, critical technologies such as autonomous navigation, guidance & control, reusable thermal protection system and re-entry mission management have been successfully validated.

ISRO acknowledges the support of Indian Coast Guard and National Institute of Ocean Technology (NIOT) for the mid-sea wind measurement and shipborne telemetry respectively in this mission.