0 In-News
A+ A-
Print Email
Heart(Afghanistan): The Prime Minister Shri Narendra Modi has been conferred with Amir Amanullah Khan Award, Afghanistan’s highest civilian honour. He was bestowed the honour by President Ashraf Ghani after the inauguration of the landmark Afghan-India Friendship Dam in Heart. 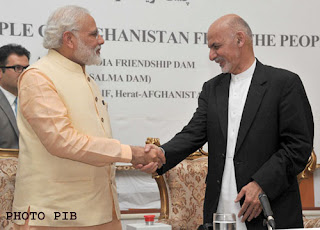 King Amanullah had strong ties with India, and moved here briefly in 1929. His affectionate ties for the country continue to be reflected in the strong partnership between the two nations.

PM Modi received the Amir Amanullah Khan award following the inauguration of the Afghan-India Friendship Dam in Heart on 4 June. As the first Indian, and amongst only a handful of foreign leaders to receive the award, it signifies the strength of a unique relationship and is a testament to the personal commitment of the PM in advancing India-Afghan ties.