Arjun Kapoor’s ‘Ice Age: Collision Course’ is all about the galactic catastrophe

0 Entertainment
A+ A-
Print Email
Arjun Kapoor was spotted promoting the film "Ice Age: Collision Course" in the capital. Arjun has given his voice for BUCK, one of the leading characters of Ice Age: Collision Course.  Buck is a larger than life, swashbuckling weasel who helps Manny, Diego, Sid and the group to protect Earth from an impending galactic catastrophe.

When asked about what made him choose Ice Age Collision Course, he said, 'I love the ICE AGE franchise and I think characters are absolutely adorable and fun.' 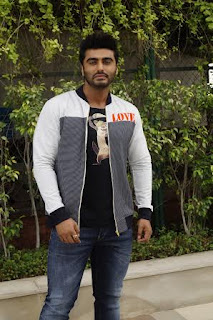 Synopsis: Scrat’s epic pursuit of the elusive acorn catapults him into the universe, where he accidentally sets off a series of cosmic events that transform and threaten the Ice Age world. To save themselves, Sid, Manny, Diego and the rest of the herd must leave their home and embark on a quest full of comedy and adventure, as they travel to exotic new lands and encounter a host of colorful new characters.

Buck is still the swashbuckling, slightly off-kilter protector of the Lost World we met in ICE AGE DAWN OF THE DINOSAURS. When this weasel discovers a sign that the end of the world is near, he comes up from the Dino land below to warn his friends, setting off with them on a mission to save the world.

The film is releasing on 15th July in 3D.