All of them undertook a sortie today from Naval Air Station Rajali at Arakkonam onboard an Indian Naval P-8I Maritime Reconnaissance aircraft for reviewing the Search and Rescue (SAR) operations for the missing AN-32 aircraft of the IAF. During the sortie that lasted nearly two haurs, he witnessed coordinated efforts involving ships and aircraft, including helicopter operations from the Navy’s LPD INS Jalashwa. 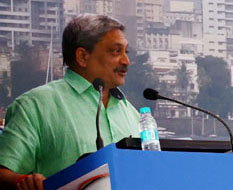 He directed that maximum resources be pressed into service so as to undertake effective SAR. He was briefed about the challenges of undertaking SAR under monsoon conditions with heavy rain, cloud cover, rough sea condition and most importantly depths of over 3500 metres in the area. He was also briefed about future plans involving additional ships and a submarine that were heading for the area to join in the SAR operations.

Apart from aspects related to the optimum deployment of resources for SAR operations, the Defence Minister enquired about the families of missing Service and civilian personnel. He was assured that constant liaison was being maintained with all families, and that all possible help was being rendered to them.