0 In-News
A+ A-
Print Email
New Delhi: UNICEF Goodwill Ambassador Priyanka Chopra today addressed over 100 adolescents from top schools and over 80 media from Delhi and Haryana, highlighting the need to give a Fair Start to every child.

The Fair Start campaign was unveiled by UNICEF India recently in the backdrop of the global advocacy efforts on Equity for Children. It focusses on persisting inequities that large groups of children in India face, affecting their survival, growth and development. The #FairStart film gives an insight into the lives of thousands of children from various background, who are full of potential but less likely to grow up healthy and safe, less likely to attend school, less likely to learn, and more likely to be married as children. 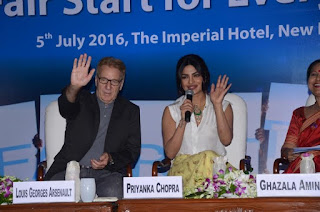 Speaking on this occasion, Mr. Louis Georges Arsenault, UNICEF Representative to India said, “We have a clear choice to make – to invest in progress of children being left-behind or if unaddressed, face consequences of a far more divided and unfair world by 2030. Changing mind-sets through awareness-raising is critical. Mobilising entire communities – in terms of political, caste and religious leaders to frontline workers, parents and children have shown positive results.

Currently, 6.1 million children in India are out- of -school; around 10 million children are engaged in work in India; close to 3500 children die every day before reaching age 5; 42 per cent of tribal children in India are stunted in their growth and development; and almost half the population of India, about 564 million people still practice open defecation. Girls in India deserve an equal chance in life too, but on an average 2.22 million girls marry early every year in India, and 23% girls between 15-19 years of age experience physical or sexual violence.

Ms Chopra has been associated with UNICEF for almost a decade. In 2010, she was appointed a UNICEF National Ambassador, tasked specifically with promoting child rights and adolescence. She has partnered with UNICEF to feature in videos and advertisements aimed at building awareness for child rights and the need to create healthy environments for children, filled with opportunities to blossom. She is kindly lending her voice to the strong cause of providing each child a fair start in life.