0 In-News
A+ A-
Print Email
In a bid to give the Olympic stars the proper owner, Delhi Chief Minister Arvind Kejriwal felicitated Olympic medal winners, PV Sindhu and Sakshi Malik, at a glittering ceremony in the Delhi Secretariat today.  While Olympic silver medalist and shuttler PV Sindhu received a cash prize of Rs two crore, wrestler and bronze medalist Sakshi Malik was presented Rs one crore by the Delhi Government.

You have set a high benchmark for the women, youth and sportspersons in India,” said Shri Arvind Kejriwal, Chief Minister Delhi Government. “PV Sindhu and Sakshi Malik have honoured the entire country. We are grateful to their coaches for guiding them through this success.’’

The function which began at 10:30 AM at the Main Auditorium, also witnessed the presence of star badminton coach Pullela Gopichand and Deputy CM Manish Sisodia, members of Cabinet, the Chief Secretary, Delhi and Secretary, Education along with other dignitaries of Delhi Government.
The Delhi Government also lauded the coaches and the participants of the Rio Olympics 2016, for their hard work and dedication. 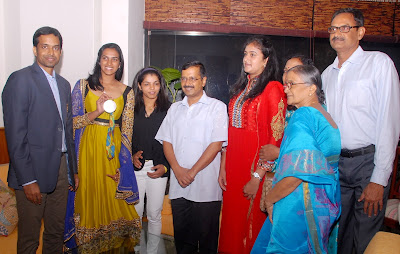 While expressing gratitude to the  Chief Minister for encouraging sportspersons, Olympic medalist PV Sindhu said, “It is a privilege to be here today. When we were at Rio, we weren’t carrying our phones and had no idea about what was happening at home. When we returned to India, everyone told us that they had been glued to their TV sets, for our matches. Thank you for all the love and support. A special mention has to be made of my coach Gopi Sir and the physios in the team who ensured that everything went off smoothly.”

It is noted that PV Sindhu scripted history by becoming country's first shuttler to hand India an Olympic silver medal.