Michael Mishra :Arshad Warsi in a unique role with humor and romance

0 Entertainment
A+ A-
Print Email
New Delhi: It is all set to rock the silver screen the latest movie 'The Legend Of Michael Mishra'  in which you will find Arshad Warsi, Boman Irani, Kayoze Iani. Producers Kishor Arora and Shareen Mantri Kedia with all these stars are busy in promoting the movie which is set to release on August 5, 2016.

Arshad Warsi who will be playing the role of Michael Mishra. When asked about his character he said "I can only define it by saying 'Jinke Dimaag tha kam, lekin pyaar me tha dum'.

He further added "The director has created a different world. The film has humor and lot of romance. You will see me doing all kind of theft in the film." 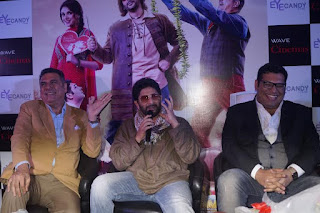 The film is a quirky comedy  directed by Manish Jha who has earlier directed films 'Maatrubhoomi' and 'Anwar' and is produced under the banner of Eye Candy Films.
The film is an edgy madcap comedy with a romantic tale at the core.

Kayoze Irani, who started his acting career with Karan Johar's Student Of The Year will be playing a role of modern day Hanuman. When asked about working with Dad Boman for the first time together, He answered "I was quite nervous on the first day but all the actors really helped me. Beside dad being there, everybody was like a father figure"

The film is scheduled to release on 5th August,2016.