Wah Taj: Movie landed into controversy just before its release

0 Entertainment
A+ A-
Print Email
Mumbai: The starcast of the film 'Wah Taj' launched their motion poster in Agra. Present at the event were Shreyas Talpade and Manjhari Fadnis along with producer Jayantilal Gada.

The film landed into controversy after the filmmakers had put up posters promoting the film across Agra which read, "Decision on Maharashtra's Tukaram Case. Taj Mahal to be closed for the tourists from 23rd September, 2016 by the Honorable Court's order."

Talking about the controversy, producer Jayantilal Gada said "The controversy did a positive effect on the film as it highlighted out movie and the topic. The film was earlier scheduled for a release in 2014 but it is releasing this year and now at least people know about 'Wah Taj'. 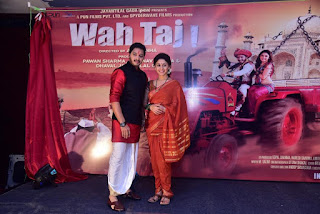 Shreyas Talpade said "I never said that Taj Mahal was mine. I just said that the land on which it is made was mine and I would fight for it"

Manjhari Fadnis who will be seen in a de-glam role after a long time said "I said yes, the moment I was offered this role because I am a Maharashtrian and I always wanted to play a character like this. I have something different to offer this time"

Directed by Ajit Sinha, the film is scheduled for a releas eon 23rd September, 2016.