Home » Entertainment » Mahammad Rafi was a lucky charm for me: Dharmendra

Mahammad Rafi was a lucky charm for me: Dharmendra

0 Entertainment
A+ A-
Print Email
Leading actor Dharmendra has said that Mahammad Rafi was a lucky charm for him and sung many hit songs for him.

The Padma Shri awardee Mohammed Rafi, was remembered on his 36th Barsi in a special musical evening organized by ‘Mohammed Rafi Foundation’ at Siri Fort Auditorium in Delhi. The essence was relived in the presence of many Bollywood singers and actors.

The melody and music that Mohammed Rafi created and pioneered during 36 long years of his career in Hindi music has withstood the test of time. 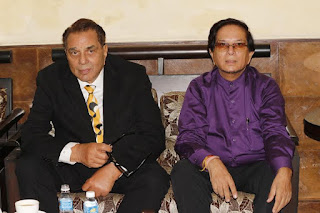 His fans are found all over the world and the legendary actor ‘Dharmendra’ considers himself as one of the biggest fan of Mohd. Rafi. Dharmendra told “The first song ‘Mere Dushman’ from my first film was sung by Mohd. Rafi that got really famous. So, he was a lucky charm for me. ‘Mein Jat Yamla Pagla Deewana’  ‘Tu Meri Dosti Ko Tarse’ and many songs were then sung by him.”

He further added “I was such a huge fan of Mohd. Rafi that I wanted him to sing a song for my son’s Debut film but it was too unfortunate that he passed away. Shabbir Kumar was considered as the voice of Mohd. Rafi so I decided him to sing for Sunny in ‘Betaab’.

The singing maestro who gave hits like ‘Likhe Jo Khat Tujhe’, ‘Abhi Na Jao Chhorh Kar’, ‘ Aaj Mausam Bada Beiman Hai’, ‘Taarif Karun Kya Uski’ and many more is not amongst us but that divine voice and soul will never fade from this earth. He was, and remains, a major force in film music, the music of love, despair, hope, humor and more.