0 Entertainment
A+ A-
Print Email
New Delhi:  Varun Dhawan entered to raptuous applause. People are screaming in abandon, the women louder than the men, and for a moment, it becomes evident why there’s so much security standing at the front of the stage. “I can see a lot of schoolchildren in here,” he says as he enters “so clearly I’m in the right place.”
On relationships:
“I don’t think this generation is as ‘fast’ as people say. I mean, the 70’s had their flower-power generation. It’s just a phase that they went thorough, and now we’re going through.”
“Relationships are awesome, I think we need them. There’s lots of kinds; friendship, family... but you have to work on them, invest in your relationships,  in people.”
On his first relationship:
“I was in college at the time... it was the first serious, long term relationship I’d been in. I think it had lasted four months... but then she cheated with me. I think I dealt with it okay; I’m a little dramatic – I’m an actor, after all – so I think I somewhere wanted to experience heartbreak anyway. There are supposed to be nine emotions, and you need to go through all of them to learn.” 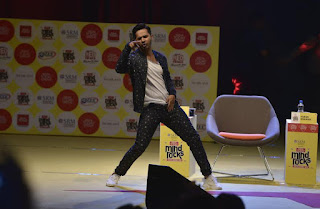 While transitioning to the next part of the session – Fitness – the moderator suggested that Varun offer the room a look at his six pack. Smoothly distracting the room, Varun instead reminded the room that it was also Narendra Modi’s birthday. Getting everyone to pull their phones out and put on their flashlights, Varun led the room in a rendition of ‘Happy Birthday, Mr Modi’.


There was also a fitness section, that featured, among other things, a quick lesson on pushups. The crowd goes wild as he pulls off his jacket, then gets into position on the carpeted stage. “When you’re doing a pushup,” he said, as people screamed in delight, “make sure your arm bends backwards, not sticking out.” This was rounded off with a quick John Abraham impression: “Ya, that’s the posture, yeah, yeah, yeah!”