0 In-News
A+ A-
Print Email
Another major achievement for Indian Warship design and construction programme with the launch of Guided Missile Destroyer, Mormugao, second ship of Project 15B, at Mazagaon Dock Ship Builders Limited (MDL), Mumbai. With a launch weight of 2844 tonnes, the vessel made its first contact with water at 11:58 AM with full fanfare during the launching ceremony graced by Chief of the Naval Staff, Admiral Sunil Lanba as the Chief Guest.

These ships are packed with an array of state of the art weapons and sensors, including vertically launched missile system for long distance engagement of shore, sea-based and air targets. With significant indigenous content, these ships are a true hall-mark of self reliance attained by our country in warship design and ship building.

PROJECT 15B: Facts in Brief

The P15B destroyers incorporate new design concepts for improved survivability, sea keeping, stealth and ship maneuverability. These ships will be equipped to carry and operate two multi-role helicopters. State of art rail less helo traversing system is being introduced on these ships for efficient helicopter handling onboard.

Stealth has been a major thrust area in P15B design. Enhanced stealth features have been achieved through shaping of hull and use of radar transparent deck fittings which make these ships difficult to detect. The ship embodies features such as Multiple Fire Zones, Total Atmospheric Control System (TACS) for Air Conditioning, Battle Damage Control Systems (BDCS), Distributional Power Systems and Emergency DA to enhance survivability and reliability in emergent scenarios. 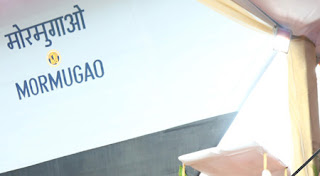 The ship’s “fire power” consists of sophisticated weapons-sensor suite including vertically launched Surface to Air Missiles (SAM) and Surface-to-Surface Missiles (SSM) for long distance engagement of shore and sea based targets. It is also noteworthy that this ship has significantly high indigenous content, in the form of weapons, machinery and material.

These ships therefore showcase the Nation’s growing capability in developing and delivering complex warships, which serves as a true hall mark of self reliance attained by our country in warship design and construction. This high level of indigenization has been achieved through participation of both public and private sector.

The second ship of P15B Yard 12705, christened, Mormugao, is planned to be launched on 17 Sep 16 at MDL, Mumbai, and will be the fifth frontline warship, including the indigenous aircraft carrier, being launched in last six years, in addition to the delivery of three frigates, three destroyers and two corvettes during the same period.