0 LifeStyle
A+ A-
Print Email
The festival of Communal Harmony and Brotherhood – Phool Waalon Ki Sair was today heralded with the playing of Shehnai at Delhi Secretariat and presenting of floral pankhas to Deputy Chief Minister, Delhi, Shri Manish Sisodia and Chief Secretary in Charge, Shri S. N. Sahai by the organizers of Anjuman Sair-e-Gul Faroshan.

Receiving the pankhas, the Shri Sisodia said that “Festivals like Phool Waalon Ki Sair are very relevant in our society as such festivals spread message of love, peace and harmony among the people. The culture of celebrating festivals of all religions with feeling of festivity and joy should be celebrated by all to promote message of peace and brotherhood in the society, said Shri Manish Sisodia on the occasion. 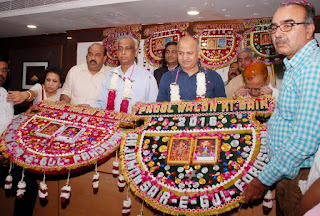 “Phool Waalon Ki Sair" is a 7-day long festival during which Hindus and Muslims together offer the floral chaadar and pankha at the Dargah of Khwaja Bakhtiar 'Kaaki' in Mehrauli and floral pankha and chhatra (canopy) is offered at the ancient temple of Devi Yogmaya in Mehrauli.

The national integration secular festival, Phool Walon Ki Sair is being organized in Delhi Since the days of the Mughals.

Its celebration was however, stopped by the British during Mahatama Gandhi’s ‘Quit India’ movement in 1942 in pursuance of their policy of ‘Divide and Rule’. The Festival was revived by Pt. Jawahar Lal Nehru in the year 1961 and since then the Festival is being organized every year by Anjuman Sair – E- Gul Faroshan. This was informed by Ms Usha Kumar.