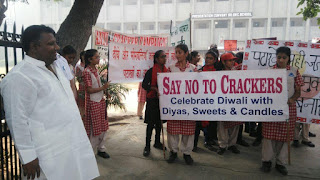 Health & PWD Minister, Satyendar Jain and Environment Minister made this appeal at a joint briefing and requested the people to join the fight against air pollution by contributing their bit in staying away from fire crackers. The government appeal came on a day when the Delhi government announced a comprehensive road map to combat air pollution during winter months, when it peaks.

Environment Minister, Shri Imran Hussain also inaugurated an Anti Fire Cracker Campaign in  the Presentation Convent School, Delhi.During the campaign, school children presented a Nukkad-Natak highlighting the harmful effects of bursting of fire crackers and their consequent damage to the environment by increasing air pollution. The Minister also flagged off a rally of the school children for spreading the message of ‘Say No to Crackers’ among the local people.

Shri Hussain lauded the role of children as the best communicators for making the Anti Fire Crackers Campaign highly successful. He observed that eco-clubs of around 2,000 schools and colleges in Delhi are playing an active role on various environment issues. These eco-clubs during the ongoing Diwali festive season are adequately sensitized for discouraging people from the bursting of fire crackers.

Shri Hussain expressed hope that the efforts of the government, concerned agencies and people in general will bring down air pollution levels on this Diwali which will be in the best interests of health and safety of  its citizens especially children, senior citizens, and people with ailments.