Home » In-News » Dussehra or Vijayadashami 2019 Updates: Stage is all Set for Burning the Effogy of Evil by Truth

Dussehra or Vijayadashami 2019 Updates: Stage is all Set for Burning the Effogy of Evil by Truth 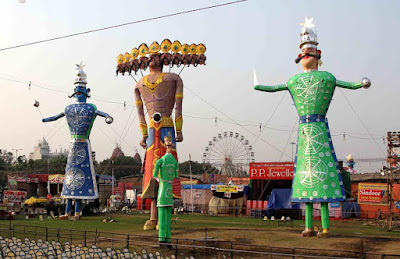 Dussehra...The major Hindu festival which manifestate the victory of Lord Rama over Ravana..the victory of truth on the evil is on full fervor today. Dussehra 2019 is the occassion which is celebrating for the victory on evil of the truth also knon as Vijayadashmi 2019.
After the long 10 days celebrations of Navratra, the last day is known as the Vinaydashmi and also the Dussehra. Dussehra has its own importance for the entire country which is being celebrated by the people of India...... mostly in the northern states

People use to burn the effigy of Raavan, Meghnad and Kumbhkaran on the occasion of Dussehra or Vijayadashmi. Needless to say, if you will go through the epic of Ramanaya, all Raavan, Meghnad and Kumbhkaran were the symbol of evil. They have played crucial role in the story of Ramayan but for wrong cause and so people use to burn the effigy of all the three in a bid to give the message of evil in our society.

People also celebrate the day of Vijayadashami or Dussehra as the victory of Lord Rama over Ravana. It has been said that it was the day of Vijayadashami or Dussehra when Lord Rama get success over the evil i.e. Ravan..the symbol of evil. Traditionally people use to celebrate the same and it also displayed the Ramleela's which are the major celebration during the ten days Navratri celebration.
It is noted that traditionally, the three effigies of Ravana, Meghnad and Kumbhakaran are set afire on Dussehra to mark the victory of good over evil.