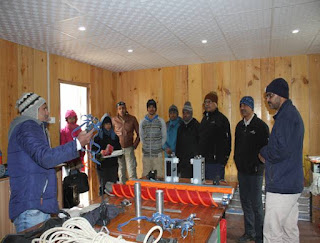 In a bid to better study and quantify the Himalayan glacier responses towards the climate change, National Centre for Antarctic and Ocean Research (NCAOR), Goa, under the Ministry of Earth Sciences has established a high altitude research station in Himalaya called HIMANSH (literally meaning, a slice of ice), situated above 13,500 ft (> 4000 m) at a remote region in Spiti, Himachal Pradesh.

Further, the researchers would be using this as a base for undertaking surveys using Terrestrial Laser Scanners (TLS) and Unmanned Aerial Vehicles (UAV) that would digitize the glacier motion and snow cover variations with exceptional precision.