0 In-News
A+ A-
Print Email
Lucknow is all set to welcome Prime Minister Narendra Modi who wil be in the capital of Uttar Pradesh to celebrate Vijya Dashmi this year. There is a great enthusiasm in the city to welcome PM Modi who will be attending the Vijay Dashmi celebrations in the city’s iconic venue outside the Aishbagh Ramleela Maidan. 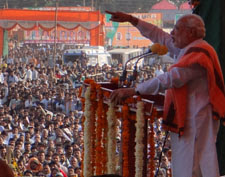 To welcome Prime Minsiter Narendra Modi and Home Minister Rajnath Singh, Posters and banners have been put up near the venue. Keeping in view the UP is all set to face the State Assemby Election in the coming days; the visit of PM in Lucknow has become a center of attractions among the people.
According to the media repotrs, the posters have been posted in the city with the message related to the Uri Attack in Kashmir.

However opposition have been accusing BJP for politicizing the issue of surgical attack in POK. Parties have blamed BJP that it has been trying to gain politically profit in the  ahead of Uttar Pradesh elections.

Perpetrators of Uri terror attack would not be spared: PMModi

The banner invoking Uri attacks and Indian army’s response to it by carrying out surgical strikes along LoC has also drawn criticism from the people on social media. Several twitter users were seen posting the pictures of the banner.

This Vijaya Dashami is 'veryspecial' for the Nation: PM Modi

He was speaking in a function organised by the Bharatiya Janata Party to celebrate the birth centenary year of the former Jana Sangh chief Deendayal Upadhyaya in the Capital.