0 In-News
A+ A-
Print Email
New Delhi: The Union Finance Minister Shri Arun Jaitley said that it is the leading institutions especially educational institutions, which can play an important role in creating mass awareness about issues like financial inclusion in the country. He said that the present Government has taken various steps in last two and a half years to link every household with a bank account.

Jaitley said that under the scheme PMJDY the Government has been able to open 240 million bank accounts and now except in certain remote and inaccessible areas, people who are in a position to connect with bank, have a bank account. The Finance Minister Shri Arun Jaitley was speaking after launching a Financial Inclusion initiative of Shri Ram College of Commerce (SRCC) titled ’Vittshala’. SRCC is a premier educational institution in the national capital in the field of commerce and economics education in the country. 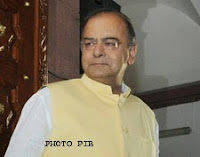 The Union Finance Minister Shri Arun Jaitley further said that the Government had launched MUDRA Yojana so that small traders, businesses and new entrepreneurs can have access to banking finance without security. He said that during the last year i.e. in 2015-16, a provision of Rs.1,20,000 crore was made under this Yojana which has been increased to Rs. 1,80,000 crore in the current Financial Year 2016-17.He said that major beneficiaries under the Scheme were women and those from weaker sections of society.

Vittshala is a Centre For Community Engagement (CCE) initiative, aimed at making communities equipped enough to manage financial resources effectively through community engagement, workshops, seminars, and discussions. Founded by a group of motivated teachers and students, the Cell wants to create an impact through its well-planned, community-oriented projects. Vittshala envisions a nation where every individual is financially literate and is empowered to act as a catalyst for economic growth.

Vittshala will act as a multi-faceted programme involving peer-counseling, developing interactive apps and events to promote financial literacy with respect to: Basics of Financial Planning, Channelisation of savings, Investments, Banking and Insurance services, Opening and operating of bank accounts and related Government schemes