0 Fashion-News
A+ A-
Print Email
The critically acclaimed play Hotel Paradiso, by the masters of mask theatre, Familie Floz, the world’s leading theatre mask specialist will be performing for the first time in New Delhi, from 28th & 29th October , at Kamani Auditorium in New Delhi. 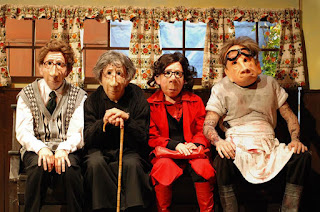 Based in Berlin, the German production, FamilieFlöz, is internationally renowned as one of the world’s leading mask theatre companies. ! Using over 25 masks  the play showcases humour, improvisation, mime and physical comedy to create a  family-friendly show. All the world’s a stage.

Four actors, 29 characters, no words and loads of laughs, Hotel Paradiso is filled with guests from around the world and is touring India for the first time with its inimitable brand of visual comedy. With its repertoire of hit shows, FamilieFlöz has captured the hearts of young and old alike.

Please find attached the text for listings for this play. Also attached are hi res images of the performers enacting the play. Sincerely hope you can use this information for the listings section. Incase you are interested in doing a bigger feature on this iconic German Production , we could arrange for email/telephonic interviews with the directors/producers of the play.