0 In-News
A+ A-
Print Email
Railway and Ministries of Urban Development have joined hands to develop Railway stations and surrounding areas to be redeveloped under Smart City Plans.  Both the ministries are working on the concept that development of smart cities since there can’t be a smart city without a smart railway station and hence memorandum of Understanding (MoU) was signed today in this regard by the Ministries of Urban Development and Railways in the presence of Shri M.Venkaiah Naidu and Shri Suresh Prabhu.

Shri Naidu suggested that to begin with 10 cities could be taken up for the proposed redevelopment with the involvement of National Buildings Construction Corporation(NBCC) which has successfully executed redevelopment projects on self-financing basis. 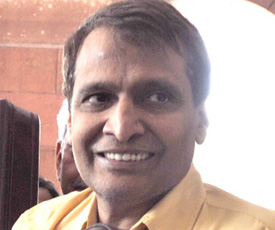 These cities are : Sarai Rohilla (Delhi), Bhubaneswwar, Lucknow, Varnasi, Jaipur, Kota, Thane, Margao(Goa), Tirupati and Puducherry. This was agreed to by Railway Minister.

Minister of Railways Shri Suresh Prabhu said that redevelopment work of Habibganj railway station has already been awarded and plans for Anand Vihar (Delhi), Surat, Bijwasan and Gandhinagar are in advanced stage. He said that several countries like Germany, France, Japan, South Korea, UK and Belgium have showed interest in redevelopment and a Round Table of domestic and overseas bankers will be organized next week to discuss financing of these redevelopment projects.