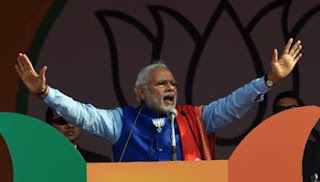 Amid the satisfactory victory for the BJP in the bypoll result declared today, Prime Minister Narendra Modi thanked people for expressing the faith and trust for his government. PM has said that the result is the clear indication for people faith in the BJP and its development and good governance.

The victory for BJP is nothing but a triumph after the recently held surgical strike on the black money in terms of Prime Minister Narendra Modi's initiative on demonetization.  BJP leaders have said that we have won the people mandate on the issue which shows that they are with the government on the issue.

It is noted that BJP has achieved its success in the result declared today in the bypoll. It has achieved the glorious success in Madhya Pradesh, Assam and Arunachal Pradesh. It has also good news from West Bengal and Tripura where it has performed well.

PM Modi tweeted and thanked people for the continued faith in BJP & in the BJP’s unwavering focus on development and good governance. He also congratulated BJP workers  & leaders for the impressive victories in these states.

It is noted that By-elections for 10 assembly and four Lok Sabha constituencies in these states and Union Territory Puducherry were held recently and its result were declared today. In Madhya Pradesh, the BJP won Shahdol Lok Sabha seat.