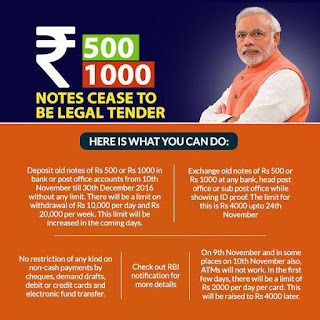 The Prime Minister said the steps taken by the Government would strengthen the hands of the common citizens in the fight against corruption, black money and counterfeit notes.

Fully sensitive to some of the difficulties the common citizens may face in the coming days, the Prime Minister has announced a series of steps that will help overcome the potential problems.

Persons holding old notes of five hundred or one thousand rupees can deposit these notes in bank or post offices from 10th November onwards till 30th December, the Prime Minister announced. There are also some limits placed on the withdrawals from ATMs and bank for the very short run.
Historic moment against black money in India: PM Modi

Shri Modi emphasized that there is no restriction on any kind of non-cash payments by cheques, demand drafts, debit or credit cards and electronic fund transfer.

BJP govt cracks down on black money: Rs 500 and Rs 1000 Notes will no longer legal

In his address the Prime Minister shared the insight into how the magnitude of cash in circulation is linked to inflation and how the inflation situation is worsened due to the cash deployed through corrupt means. The Prime Minister added that it adversely affects the poor and the neo-middle class people. He cited the example of the problems being faced by the honest citizens while buying houses.