Home » Top-News » Modi Government is acting like a dictator: Congress 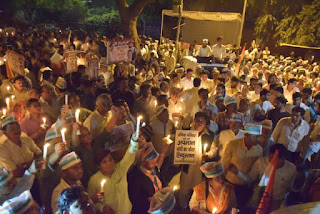 Congress has strongly objected the manner in which Delhi Police illegally detained Congress vice-president Rahul Gandhi without any valid reason. Delhi Congress President Ajay Maken has said that the yesterday incidents shows the authoritarian attitude of the Modi Government

In a bid to oppose the move, tousands of  Congress workers and leaders, led by Congress vice-president Rahul Gandhi,  participated in a candle march, organized by the Delhi Pradesh Congress Committee under the leadership of Ajay Maken, at Jantar Mantar this evening.

The candle march was held to protest against the illegal detention of Shri Rahul Gandhi  by the Delhi Police yesterday, without any valid reason  when he went to meet the relatives of deceased ex-soldier Shri Ram Kishan Grewal at the RML Hospital.

On the occassin, Ajay Maken said when Shri Rahul Gandhi went to the RML Hospital to meet the relatives of deceased ex-soldier Shri Ram Kishan Grewal,  Delhi Police illegally detained Shri Rahul Gandhi without any valid reason. He said the Modi Government’s action gives out a clear message that it was afraid of Shri Rahul Gandhi, as Modi has done nothing for the development of the country in his two-and-a-half-year rule, other than indulging in verbal rhetorics.

Shri Maken said Shri Rahul Gandhi had strongly objected to the illegal arrest of the relatives of the deceased ex-soldier Shri Ram Kishan Grewal. Maken wondered what kind of democracy it is where the Modi Government is acting like a dictator.  He said the Modi Government was not only denying the solidier his just rights, but it was also insulting the family members of the dead soldier.

He further said  that  Modi had patted himself on his back for implementing OROP (One Rank One Pension), but unfortunately, due to the non-implementation of the OROP fully, an ex-soldier had taken his own life. He said on the one hand the soldiers were waging a do-or-die battle against the Pakistani forces at the border, and instead of boosting their morale, the Modi Government was trying to rob the soldiers of their dues.