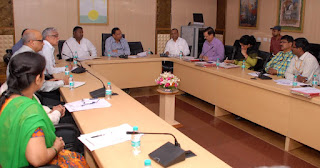 In a bid to combat to combat air pollution the scientists have advised the Delhi government to stress upon a unified action plan for the entire NCR, for its anti-pollution efforts to succeed. As the Chief Minister appointed ministerial task force to combat air pollution reviewed the air quality of the national capital and appealed to the central government to take all possible steps to immediately stop crop residue burning in the neighbouring states.

Head of the task force Mr Satyendar Jain and Environment Minister Mr Imran Hussain discussed various options (including introduction of artificial measures, if required) with scientists of the Central Pollution Control Board and the Delhi Pollution Control Committee to deal with the situation, which will be placed before the Chief Minister and the Deputy Chief Minister.

According to the scientists from both the agencies, current meteorological conditions pre and post Diwali so far have not been helpful and have therefore not contributed to improve the air quality, which however is expected to see a positive trend in the coming days

Mr Jain asked all the stakeholders not to pay any heed to rumours like there is a likelihood of schools being closed temporarily since the scientific data shows peak of pollution during nights and NOT during schools hours.

It was decided to take up the following steps on priority that Delhi government will on Friday request the Centre to enforce relevant laws to regulate largescale construction in NCR, the dust from where is polluting Delhi air.CPCB has been requested to crack down on polluting industrial units in NCR.

Delhi Government will request the Centre to take effective steps to ensure an immediate end to crop residue burning in neighbouring states.In Friday’s meeting, Delhi government will ask for restriction on plying of diesel taxis/autos in NCR, particularly on entry points of Delhi.

Strict enforcement of guidelines to prohibit entry of overloaded and polluting transit trucks into Delhi.Apart from the above mentioned steps, the Delhi government asked all relevant departments to strictly enforce the directions given by the Deputy Chief Minister on Tuesday and begin implementation immediately to ensure that all deadlines are met.