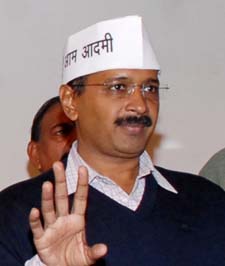 Continuing the fresh attack on PM Narendra Modi on the issue of demonetization, Delhi Chief Minister and National Convener of the Aam Aadmi Party Arvind Kejriwal has  demanded that the Prime Minister find a solution within 24 hours to the economic emergency he has unleashed in India. He asked that action be taken against the real hoarders of black money, instead of indulging in emotional speeches that do nothing to solve practical problems faced by crores of Indians today.

Kejriwal further said that there is a widespread chaos across the country because of a severe cash crunch, which was a result of the Central Government's sudden announcement to demonetize Rs 500 & Rs 1000 notes. Crores of people are facing desperate situations in which they have no money to buy basic necessities like food.

At a time like this when people are anxious about what lies in the future, there appears to be no effort from the Government to alleviate the suffering of ordinary Indians. After Prime Minister Narendra Modi returned from Japan, there was an expectation that he would announce something that would stop this ordeal immediately. However, that was not the case.

"I was extremely saddened by the kind of language the Prime Minister has used for those who have been worst hit by this crisis. He said those who are lining up in queues are people who have been involved in scams. Are those people resorting to suicide, those dying at the gates of hospitals, those dying of shock scamsters? What kind of joke is he pulling on the people of India? We demand that he apologize to the people for insulting them," said AAP's National Convener Arvind Kejriwal.