Home » Health-Beauty » News-Delhi » Controlling air pollution in Delhi; These images says the facts behind the concerns

Controlling air pollution in Delhi; These images says the facts behind the concerns

0 Health-Beauty, News-Delhi
A+ A-
Print Email 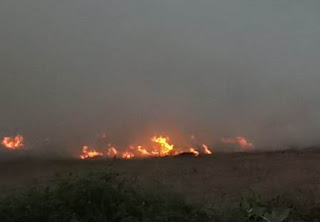 Despite the all measures to control the air pollution, things are not on the track. The latest scenario appearing in these days are enough to show the burning noticed at various locations in Haryana and Punjab along the Delhi Chandigarh National Highway.

Delhi Environment Minister Mr Imran Hussain has said that it is a matter of deep concern that when such instances are visible even on the National Highway, what might be the situation in other areas of these states ?

This situation clearly indicates that  stubble burning may be widespread in the country side of neighboring States - Punjab, Haryana, Rajasthan and Uttar Pradesh.
Top fitness tips for working women by Experts
This situation leads to reasonable apprehension that Delhi may witness and experience another episode of worsening ambient air quality conditions in the coming weeks and months. It also shows that the Central Government and Governments of these States have not seriously taken up the issue of preventing stubble burning despite repeated requests from Delhi government.
Neurological Diseases: Symptoms and Remedy by expert
He further said that an unpleasant situation was preventable and if the Centre and these state governments wake up even now, northern India can still be saved from disastrous consequences of air pollution in coming days. Poor farmers have not been incentivised adequately, thereby forcing them to once again resort to burn the agriculture waste residue.

Air Pollution and risk of Diabetes;Prevention and Cure

It has also been earlier widely reported in the media that farmers in neighbouring States are finding it more convenient and cheaper to pay fines for stubble burning instead of measures needed for avoiding such burning.

It is extremely painful that despite repeated requests, the Central Government has still not convened high level meetings with the Chief Ministers and Environment Ministers of neighbouring States to find a permanent solution to this problem. Consequently, due to apathetic and lackadaisical approach of the Central Government and the neighbouring State Governments, we are facing such an adverse situation.
Top fitness tips for working women by Experts
Adverse ambient air quality conditions affect the health and well-being of the people of Delhi especially the children, old people, pregnant women, lactating mothers and people affected with respiratory and heart ailments.
------------
Note: Please note that the tips/suggestions mentioned in the article are only for general information purposes to keep you updated about the issue which is expected to common people and these should not be construed/ followed as professional medical advice. We recommend and request you always to consult your doctor or a professional healthcare provider if you have any specific questions about any medical matter regarding the topic.