Home » LifeStyle » George H.W. Bush dies; Things you should know about him

George H.W. Bush dies; Things you should know about him 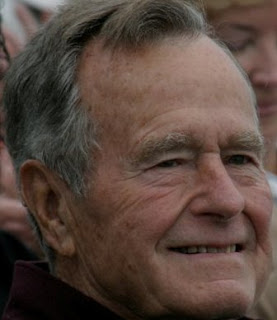 George H.W. Bush, former President of USA who is known for steering America through the cloud of the Cold War died at the age of 94. Certainly George H.W. Bush was the great politician for the USA and he has also the political dynasty  as his son George W. Bush commonly known as Junior Bush also become a part ot the White House.
George Herbert Walker Bush was born on June 12, 1924 in Milton, Massachusetts.
George H.W. Bush wss the 41st American president.
He was the person who played crucial role in making a  coalition to defeat Iraqi strongman Saddam Hussein.
In his mission, he  assembled a coalition of 30 nations against Iraqi forces to get out from Kuwait.
He launched the famous 'Operation Desert' for the purpose.
He ordered an attack on Panama in 1989 to overthrow strongman Manuel Antonio Noriega during his tenure.
He was an honors graduate of Yale University.
H.W. Bush was the person who was the witness for the peaceful fall of the Soviet Union in 1989 and deciding the role of Super Power at the situation.
Being a pilot, he flew 58 combat missions during World War II.
He had represented as the US ambassador to the United Nations.
H.W. Bush won a seat in the US House of Representatives in 1966.
He married Barbara Pierce in January 1945.
H.W. Bus had remained an envoy to China during his career.
He was a war pilot and also the former CIA chief for his country.
In 1973 and 1974, Mr. Bush served as chairman of the Republican National Committee.
He has left no stone unturned for his second term but  denied a second term and he lost the 1992 election against the Democrat Bill Clinton.