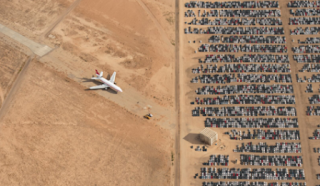 Selected from nearly 10,000 entries, a photo of thousands of recalled Volkswagen and Audi cars sitting idly in the Mojave Desert has been chosen as the grand-prize winner of the 2018 National Geographic Photo Contest. The photo, titled “Unreal,” was captured by Jassen Todorov of the United States. He has won $5,000 and will have his winning image featured on the @NatGeo Instagram account.

A concert violinist by trade, Todorov began soaring above the ground in the early 2000s, eventually becoming a flight instructor and igniting his passion to visually capture the aerial world below—including both epic beauty and environmental challenges.

“When I fly long distances, I listen to a lot of music. I’m able to combine music, flying, and photography. Music has a lot to do with structure and composition, colors and patterns, moods and characters—when I am looking at a photo, I am thinking about the same things,” Todorov said.
Pedestrians and cyclists account for 26% of all road traffic deaths:WHO Report

Simultaneously flying, communicating with airport control, and photographing is a juggling act Todorov has refined over the years. What he was able to capture was incredible.

On the importance of the photo, Todorov said, “By capturing scenes like this one, I hope we will all become more conscious and more caring for our beautiful planet.”

Models displaying collections on a cruise liner by Queensline