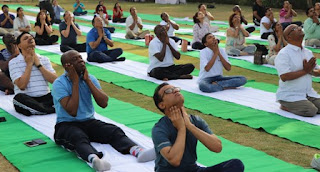 Lion Gaurav Gupta in his welcome address thanked Ambassador of Nigeria for giving the opportunity to host this unique session in the embassy premises. He welcomed HE Ambassador of Vietnam, HE Ambassador of Rwanda, deputy Ambassador of Ghana, Panama and Mauritius. Diplomats of Burkino Faso and students of different African countries were acknowledged. Yoga exponent Mansi gulati demonstrated face yoga exercises and told its benefits for the whole body. In her speech she mentioned that Face yoga is a series of exercises that promise to do for your face what yoga does for your body: relax and tone muscles.

The yoga session was carried out in the embassy lawn with diplomats from various nations. HE Ambassador of Nigeria expressed his happiness for such useful workshop. He even made a promise to conduct more such yoga workshops in the future. With the great vision and efforts of Prime Minister Narendra Modi United Nations General Assembly decided to celebrate International Yoga Day on 21st June every year from 2015 and in view of the same the Govt of India has appointed a dedicated ministry for the same in the name of AYUSH.

This was yet another effort by Rajasthani Academy & Manasvani Foundation by joining hands with Embassy of Nigeria to take this vision further. The event was initiated with prayer dance by baby Chahat Goyal from Sirsa, Haryana which was appreciated by all. Mr Yabani & Ms Stella from Nigeria High Commission were instrumental in setting up this workshop and gave their full hearted support. The hospitality partner for the event were Kitchen Kraft, gift partners were Wondersoft & Raw Juices and the event was co managed by Crafts Buzz & Amaltas. HE Mr. Alem Woldemariam, ambassador of Eritrea,  Dean of African Missions in India who was the chief guest of the event was unfortunately unable to come and had sent his blessings and good wishes to the organisers.