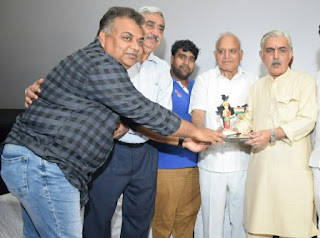 The 44th edition of the Matri Shree Awards, conducted for the last 43 years in the regard and respect of journalists and artists, was held in the National Capital. During this ceremony, 29 journalists from the country's Print and Television, a social worker and a film, along with Shailesh Giri, Director of Effective Communication Company of Northern India, were honored with the Shield of Bharat Mata  The film 'Badhaai Ho', starring Ayushmann Khurana, was declared as the Best Hindi Feature Film.

Dinesh Sharma, the convener of the Award committee complimented the media persons for their outstanding work and awarding efforts. He said that the media has always played an important role in giving correct direction and improving the condition of the country even while dealing with hefty challenges during their work. He also said that the sole purpose of conducting this Annual Award Ceremony for the people associated with the Media and Social Work is to encourage the people of the society to make the world a better place. It is worth noting that these Awards were initiated keeping in mind the abuse and fear of journalists during the Emergency. Late Lala Jagat Narayan was the first person who was honored with the Shield of Bharat Mata.