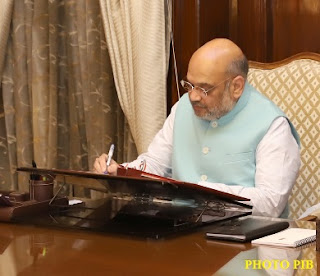 Amit Shah, Union Minister of Home Affairs, assumed charge of his office. He was greeted by Union Home Secretary Rajiv Gauba and Director, Intelligence Bureau Rajiv Jain upon arrival at the North Block.

Shri Amit Shah was recently elected to the 17th Lok Sabha from Gandhinagar constituency. He has been a Rajya Sabha member, Minister in Gujarat Government and MLA in the Gujarat Legislative Assembly. Professionally he pursued Agriculture and has been a Political and Social Worker.

Born to Smt. Kusumben and Shri Anilchandra Shah, an affluent Gujarati family, in the year 1964 in Mumbai, Amit Shah lived and studied in his paternal village Maansa, Gujarat until the age of 16, when upon completion of his school education, his family shifted to Ahmedabad. He acquired his B.Sc. (Second Year) degree from Gujarat University, Ahmedabad.

Amit Shah has been a member of the Gujarat Legislative Assembly from 1997 to 2017 and he served as a Minister in the Government of Gujarat from 2002 to 2010, and held key portfolios including Home, Transport, Prohibition, Parliamentary Affairs, Law, and Excise. In August, 2017 he was elected to the Rajya Sabha, and ceased to be a Member w.e.f. May 23, 2019 following his election to the 17th Lok Sabha.