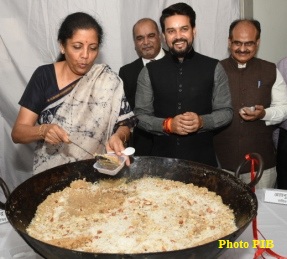 Union Finance Minsiter Smt. Nirmala Sitharaman with Minsiter of State for Finance Anurag Thakur and other senior officer of the ministry witnessed the symbolic Halwa ceremony in a bid to mark the commencement of Budget printing process for the General Budget 2019-20. The opportunity takes place in North Block where Finance Minister was accompanied by other senior officials of the ministry.

It is to be noted that the Halwa ceremony is the important celebration to begin the Budget printing process for the General Budget every year. The event is observed to begin the process with the sweet dish which is prepred in a big Kadhai and it used to served among the number of the staff who are directly related to the printing  process of the documents of the budget.

According to sources, the officers and staffs are not even allowed to contace their family so that the printing budget documents remains confidential and secret.

Union General Budget 2019-20 is to be presented on 5th July, 2019. To maintain the secrecy of Budget, there is a “lock-in” of the officials involved in making the Budget. Budget press situated in North Block, which houses all the officials in the period leading up to the presentation of the Union Budget. These officers and staff gain touch with their near and dear ones only after the Budget is presented by the Union Finance Minister in Parliament.

Shri P.C. Mody, Chairman, CBDT; Shri P.K. Das, Chairman, CBIC, Members of CBDT & CBIC and Shri Arvind Srivastava, Joint Secretary (Budget), besides other officers and staff of the Ministry of Finance involved in the Budget preparation and printing process were also present on the occasion. Later, the Finance Minister took a round of the Press and acquainted herself about the printing process.