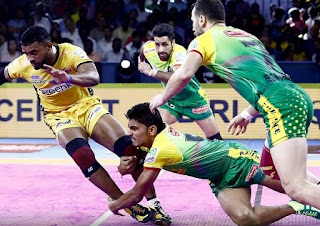 It was the interesting match played between Patna Pirates and Telugu Titans which showed that Patna Pirates aren’t totally reliant on Pardeep “Record-breaker” Narwal as the likes of Jang Kun Lee, Hadi Oshtorak and Mohammed Maghsoudlou are vital cogs in the Patna machine. Patna Pirates’ defence scored 16 tackle points and laid the foundation for a solid victory.

During the match, the second half began in a similar fashion as Patna Pirates’ defence did a tight job on the Desai brothers. Siddharth “Baahubali” Desai made a successful do-or-die raid in the 25th minute as Telugu Titans trailed 12-24. Jang Kun Lee picked two raid points and is proving to be a fine addition to the Patna Pirates side.

It took 31 minutes for Suraj Desai to pick his first point and by that time Telugu Titans’ fate was almost sealed. Patna Pirates showcased an excellent display of team effort and ensured that the Titans ended their home leg without a win.