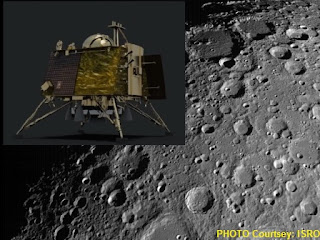 By P.C. Shivam
Chandrayaan-2 Landing: Amid the all blessings from the 1.35 billion people of the country, the Chandrayaan-2's landing module Vikram went silent before just landing on the Lunar Surface. Certainly entire nation was hoping for a good indication from the much awaited mission, which left contactless after a 47 day journey of the mission.

However India is the first country which has sent its mission to the South Pole of the Moon. Prime Minister Narendra Modi has praised ISRO Scientist's effort and said that entire nation is with you.

The launching of Mission Chandrayaan-2 was beyond the expectation.

Chandrayaan-2 has several science payloads to expand the lunar scientific knowledge through detailed study of topography, seismography, mineral identification and distribution, surface chemical composition, thermo-physical characteristics of top soil and composition of the tenuous lunar atmosphere, leading to a new understanding of the origin and evolution of the Moon.