Movie Family of Thakurganj: Story of Ideology and Confrontations between Two brothers

0 Entertainment, In-News
A+ A-
Print Email 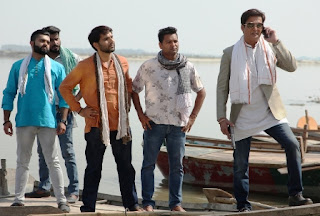 Manoj Jha, director of the film, says, "Family of Thakurganj is a unique story full of thrills; the film has been presented in a completely new way which showcases the ideology of two brothers and their confrontations.
Check this Pretty looks of the urban divas
Family of Thakurganj is completely a family entertainer and gives a strong message as well. In this movie, Jimmy Shergill and Mahi Gill’s chemistry will be worth watching. The story of this film will touch the hearts of the audience."
Shravan Mass 2019: Shravan Somwar Dates,Shravan 2019 Start Date and Know All Details

The music of 'Family of Thakurganj' is by Sajid- Wajid .There are four songs in the film. The film's Creative Director Prince Singh says that this film also includes a Holi song, which is also a film's situational song. Prince Singh has worked hard to complete this project because he has been involved with his work and his involvement from production to post production.
Neurological Diseases: Symptoms and Remedy by expert

The film's choreographers are Chinni Prakash and Raju Khan. Its shooting has been completed in record time. Made under the banner of Lovely World Entertainment, the story revolves around family, cultural values and new thinking, which is based on a small town in North India. Besides Jimmy Shergill and Mahi Gill other actors like Pranati Rai Prakash, Saurabh Shukla, Pawan Malhotra, Nandish Singh, Yashpal Sharma, Mukesh Tiwari, Supriya Pilgaonkar, Salil Acharya, Manoj Pahwa are also playing important roles. The trailer received good response from the audiences so; they are eagerly waiting to watch the film. 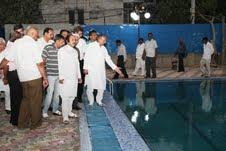 The swimming pool, developed by the North Delhi Municipal Corporation (NDMC) is situated at U & V Block in Shalimar Bagh. The premises has two changing rooms one for men and another for women.

On these occasion, Sh. Ram Kishan Singhal said that the swimming pool is was redeveloped by the corporation in period of three months. The work done by the employees and the workers should be appreciated. After the redevelopment now adults can also avail the facility of swimming pool besides children, he said.
Watch the Red Hot Summer Collection by Designer Ashima Sharma
On the occasion, special guest, leader of house NDMC, Mahender Nagpal said that "NDMC always try to provide each and every facility to our citizens".
Watch the Adah; The glorious collections by Shilpi Gohri