Varanasi: With fielding his nomination from here, AAP leader Arvind Kejriwal has made it clear that Modi and Rahul will be his main target and will leave no stone unturned to create another history from here. Although it is Modi, who is all set to file his nomination from Varanasi and certainly it will a mega event in the history of Varanasi in terms of nomination.

During his nomination and road show, massive crowds were enough to prove his strength and he attacked clearly on Modi and Rahul during his speeches.

Needless to say, it was the biggest show of strength by the Aam Aadmi Party since the former Delhi chief minister shifted to Varanasi and it was also a suitable occasion to show the strength. Obviously he is here to fight against Narendra Modi and it was needed also. 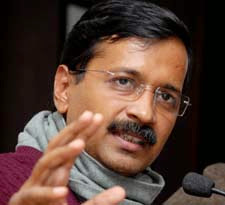 Kejriwal clearly targeted Modi and Rahul and proved himself as the common man where as both of them belongs to helicopter kin of politics.

Indicating the massive hoarding and banners from Modi and Congress, Kejriwal asked from where Modi and Gandhi were getting the money being poured into their election campaigns in the election. He said that he is fighting the election from the money got from the common man of the country.