0 Top-News
A+ A-
Print Email
Amritsar: Leader of Opposition in Rajya Sabha and BJP candidate from here, Arun Jaitley said that the Congress Party is at odds. It is unable to accept the harsh reality that it is going to be reduced to a two digit party. A two digit party must reconcile to this reality and plan for the future. After all there is no last day in the calendar of politics.
But a leopard never changes its spots. The Congress Party feels that it was born to rule. It is unable to visualize another party or person in power, least of all Narendra Modi. The guilt of having tried to implicate him falsely for over twelve years has created a fear psychosis about Modi in the Congressmens’ minds. It is for this reason that the Gandhis are shrill to the extent of being illogical when it comes to any references, made to Narendra Modi. 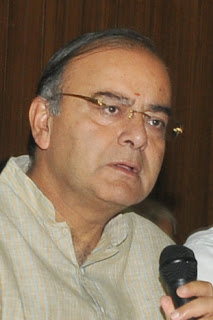 Salman Khurshid has virtually accepted defeat when he says that Congress may consider supporting the Third Front. Fortunately the projected figure in their case shows that even these manipulations are not likely to work. The electorate is now aware of these manipulative tendencies and is likely to deliver a decisive result.
Those who toy with the idea of Third Front with Congress support are only reviving an idea which has repeatedly failed. Such non ideological combinations formed purely for convenience can never deliver governance. There are many who rejoice the political instability. It is only then that they can claim some relevance. I am sure that the electorate is wise enough to defeat not only the Congress but also the ‘merchants of instability’.