New Delhi: Justice Rajendra Mal Lodha was sworn in as the 41st Chief Justice of India by President Pranab Mukherjee at the Rashtrapati Bhawan. He took over charge from Juste (Retd) P Sathasivam who stepped down after completing nine month at the office of the top head of the judiciary of the country.

Enrolled with Bar Council of Rajasthan in February, 1973.

Elevated as a Permanent Judge of Rajasthan High Court on January 31, 1994. 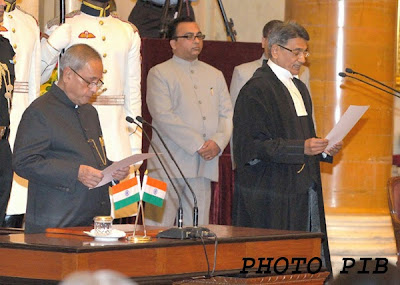 Transferred to Bombay High Court where he assumed office on February 16, 1994.

As a Judge, Bombay High Court for thirteen years, he sat on almost all jurisdictions.

Elevated as a Judge of Supreme Court of India on 17th December, 2008.