0 News-Delhi
A+ A-
Print Email

New Delhi: In the wake of large number of notices issued by North MCD to traders of Delhi demanding parking and conversion charges and for non payment threatening to seal the shops, a delegation of the Confederation of All India Traders (CAIT) today met North MCD Mayor Mr. Yogendra Chandolia at his offi ce at Civic Centre and demanded his immediate intervention in the matt er since such notices are in clear violation of Th e National Capital Territory (Special Provision) Act,2011. Th e delegation was led by CAIT National Secretary General Mr. Praveen Khandelwal and leaders of more than 100 leading trade associations of Delhi comprised the delegation. 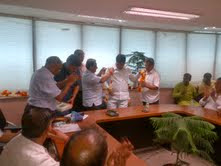 While felicitating Shri Chandolia on his assuming the offi ce of Mayor, North MCD, the delegation drew his att ention towards the notices issued by the North MCD particularly in special area which has created an atmosphere of terror amongst the trading community. Th e CAIT said that the said notices are ultra-virus, illegal and void since Th e National Capital Territory (Special Provision) Act,2011 provide protection to traders from any kind of punitive action on issues pertaining to Master Plan till 31st December,2014. The delegation also said that there are many other provisions which debar MCD to take any action.

While talking to trade leaders Mr. Yogender Chandolia informed that prior to meeting the CAIT

delegation, he has held a meeting with senior offi cials of the North MCD and straight directions have been given not to initiate any proceedings on the notices already issued and also directed that no further notice is issued. He said that very shortly he is convening a joint meeting of the Senior MCD Offi cials with Trade leaders and issues relating to parking and conversion charges, sealing notices, issuance of Trade Licenses and other issues of the traders pertaining to MCD will be discussed threadbare and a suitable solution will be worked out. He said that eff orts will be made to ensure growth of trade in Delhi rather than destroying the trade. He also said that he is well aware of the problems of the traders and all kinds of bureaucratic hurdles will be removed.