Kyoto: The Prime Minister, Narendra Modi, today witnessed the signing of the Varanasi-Kyoto Partner City affiliation MoU between the Governments of India and Japan at the State Guest House Kyoto. The agreement was signed by Smt. Deepa Gopalan Wadhwa, Ambassador of India in Japan, and Mr. Daisaku Kadokawa, the Mayor of Kyoto.

The MoU focuses on heritage conservation, and cooperation in art, culture and academics. It will also serve as a framework for the smart heritage cities programme. 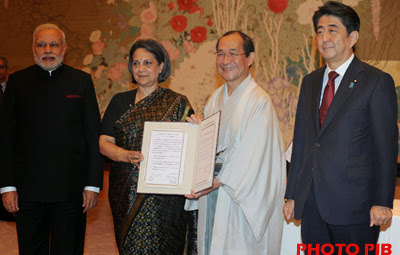 Shri Narendra Modi also fed fish at the State Guest House in the presence of the Japanese Prime Minister, who hosted a dinner for Shri Modi.

Earlier today, the Prime Minister arrived at Kansai International Airport, Osaka. He was received by Mr. Yagi, Ambassador of Japan in India, and Mr. Yamazaki, Chief of Protocol, Ministry of Foreign Affairs,Government of Japan, and the Ambassador of India in Japan, Smt. Deepa Gopalan Wadhwa.