0 In-News
A+ A-
Print Email
Amid the much surprising move for the Indian cricket team and BCCI, now the former captain Anil Kumble appointed as the Indian cricket team's head coach. The country's most successful bowler, has been appointed for a one-year tenure. Other big guns who were in the race with Kumble are former Team Director Ravi Shastri, Australians Tom Moody and Stuart Law.

Meanwhile newly elected BCCI President Anurag Thakur has said that  BCCI has been very transparent and it had fixed a criteria for the same. 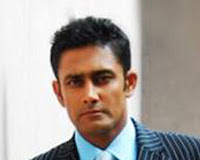 It has been said that there was the CAC as well and it has gone through the process, interviewed and recommended some important names before reaching any conslusion.

About Kumble:
The highest wicket-taker for India till date and third in the international list behind Muttiah Muralitharan and Shane Warne.
During his career, het took 619 Test wickets and 337 in ODIs for India.

Kumble is the second bowler in Test history to capture all ten wickets of an innings.His only Test century came against England at The Oval in 2007. He played total 132 Tests, Total Wickets 619, out of ODIs 271 and Test 337.

During  tenure as captain of India, Test team from November 2007 to October 2008,  in which Kumble and his team won home Tests against Pakistan, South Africa and Australia.