0 Entertainment
A+ A-
Print Email
The citizens of Rome are hungry. Coriolanus, the hero of Rome, a great soldier and a man of inflexible self-belief despises the people. His extreme views ignite a mass riot. Manipulated and out-manouevred by politicians and even his own mother Volumnia, Coriolanus is banished from Rome. He offers his life or his services to his sworn enemy Tullus Aufidius. Starring Ralph Fiennes, Gerard Butler, Vanessa Redgrave and Jessica Chastain.

It is noted that EU Film Festival returns to India with a feast of 24 award winning European filmsSpecial screening of 24 Films from 24 European countries in 11 Indian cities.

The European Union Film Festival premieres in New Delhi, India on the 27 May, 2016 with a screening of the British film Coriolanus. Organized by the Delegation of the European Union and embassies of EU Member States in partnership with local organisations, including the Federation of Film Societies of India, the festival will traverse through Delhi, Chandigarh, Mumbai, Kolkata, Ahmedabad, Pune, Chennai, Bangalore, Hyderabad, Coimbatore and Jodhpur till August 14, 2016. 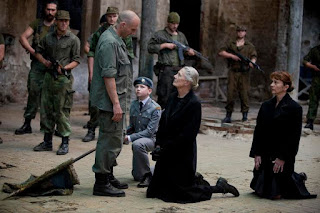