0 Top-News
A+ A-
Print Email
The Union Cabinet under the Chairmanship of Prime Minister Shri Narendra Modi has given its approval for setting up the India Post Payments Bank (IPPB) as a Public Limited Company under the Department of Posts, with 100% Government of India (GOI) equity.

The total expenditure involved in this project is Rs 800 Crore. All citizens, especially 40% of the country's population that is outside the ambit of formal banking in the country will benefit from this project. The project will be rolled out in the entire country in a phased manner.

The IPPB will obtain banking licence from RBI by March 2017 and by September 2017, its services will be available across the country through 650 payments bank branches, linked post offices and alternative channels riding on modern technology including mobiles, ATMs, PoS/ m-PoS devices etc and simple digital payments. 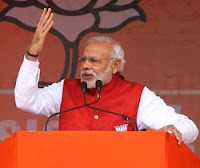 The proposal will further the cause of financial inclusion by providing basic banking, payments and remittance services and facilitate financial services like insurance, mutual funds, pensions and access to credit in tie-up with third party financial providers with special focus on rural areas and the unbanked and under-banked segments.
It will generate new employment opportunities for skilled banking professionals and will generate opportunities for propagating financial literacy across the country. It will create the largest bank in the world in terms of accessibility and in time, will encourage the move towards a less cash economy.

It is noted that the setting-up of the IPPB to further financial inclusion was one of the budgetary announcements during 2015-16.
The Department of Posts had obtained the "in-principle approval" of the RBI in September 2015 to set up the India Post Payments Bank. The India Post Payments Bank will leverage the Department’s network, reach, and resources to make simple, low-cost, quality financial services easily accessible to customers all over the country.