0 In-News, Top-News
A+ A-
Print Email
New Delhi: Amid the much hue and cry over the cow and its related issues, Prime Minister  Narendra Modi has  expressed anger at self-styled “gau-rakshaks” (cow-protectors) who “run shops in the name of cow protection. PM  has demanded for  action against criminals who masquerade as protectors of the cow.

He was addressing in a unique “townhall” interaction that marked two years of MyGov, - the Government’s web platform for participatory governance - the Prime Minister asked State Governments to prepare a dossier of such people.

During the show, PM  answered a range of questions on various subjects such as good governance, foreign policy, and participatory democracy. 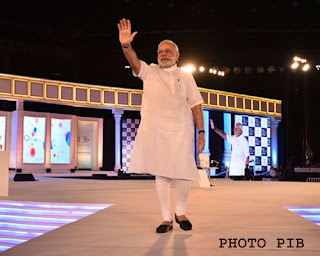 Mentioning how cows were dying due to plastic consumption, he urged all those who were genuinely concerned about the welfare of cows to devote their efforts to ensuring that cows do not consume plastic.

He said that the spirit of democracy is incomplete if one thinks the citizen's role stops at voting. Participative democracy is essential, he emphasized. He said 'last mile delivery' is as important as policies, and the benefits must reach the intended beneficiaries. He said good governance means those processes that are redundant do not exist. Grievance redressal systems are the biggest strengths of a democracy, he added.


Narendra Modi said if there is one sector that can power the economy, it is agriculture. Mentioning the Rurban Mission, the Prime Minister said that his vision was to provide modern amenities to the rural areas, while retaining the soul of villages.