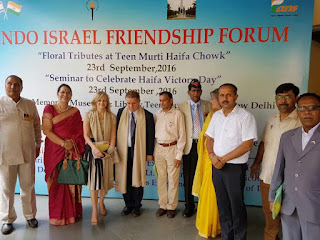 It celebrated Haifa Mukti day with a seminar on "World Peace: Significance of Indo-Israel friendship".

Hon’ble union minister for defence , Mr Manohar Parrikar, paid tribute to the martyrs at the Haifa chowk and emphasised on the relationship India and Israel possess.Israel ambassador to India, Daniel Carmon also paid tribute, along with the minister and Indresh Kumar, patron and founder FANS.
Meet Rajasthan Girl Suman Rao: The 2nd Runner Up at the Miss World 2019 in London
The ceremony was attended by Brigadier M.S. Jodha, the grandson of the man who went on to lead the horsemen. Brig Jodha along with an Indian delegation toured the city and visited areas in which his grandfather fought. A very informative presentation by Brig. MS Jodha on Haifa, enlightened the audience about the significance of the day.
Live Piano Concert: Meet the India's Youngest Pianist with a Colorful Performance
A book on Haifa, “INDIAN HEROISM IN ISRAEL” written by Shri Ravi Kumar, VishwaVibhagPramukh, RSS, was released by the dignitaries. Mr. Kumar who is also an advisor to Indo Israel Friendship Forum, highlighted many contributions of Jewes in India. He shared how Jews suffered discrimination almost everywhere but in India.

Lt Governor JagdishMukhi, said, when Jews had to face discrimination in all countries including UK, Russia, Germany and Italy but they never faced it in India. Jews in India have flourished since the time they migrated and they are on senior positions like in army, government and Bollywood."
Mother's Day 2019: Know the Mother's Day History and ways to celebrate
Facts about 'Haifa Day:  This is in commemoration of the supreme sacrifice of more than 900 Brave Indian Soldiers who laid down their lives for liberating the Palestinian Port of Haifa from Ottoman Empire of Turkey during World War-1 on September 23, 1918. They were from the Lancers of Maharajas of Jodhpur, Mysore and Nizam of Hyderabad.