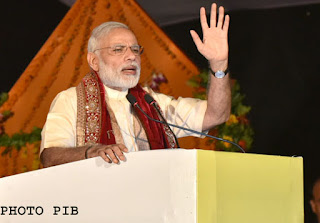 Prime Minister Narendra Modi has said that the  whole country is talking of the might of the Indian Army today, our soldiers’ might was being hailed in a manner reminiscent of the way Israel was once appreciated.

PM further said that the soldier on the border has always inspired the whole nation,” he said, adding that the Indian Army is second to none. PM was  addressing  the ‘Parivartan Rally’ organized  in Mandi, Himachal Pradesh.

PM today also inaugurated three hydroelectric projects of 1,732 MW capacity in the premises of the Vallabh College, dedicating these to the nation.

He further said that, “We are as proud of the veteran soldiers who have inspired the upcoming generations as we are of the soldiers still serving the country along the borders,” the Prime Minister said, adding, “When I salute the soldier on the border a hundred times; I also salute the veterans as many times.”
Praising Mandi for its contribution to the campaign of Swachh Bharat, Shri Modi congratulated MP Shri Ram Swaroop Sharma, his team and the citizens of Mandi for leading the efforts of the womenfolk and the local people in the cleanliness drive.

Modi said that he had, a while earlier, dedicated to the people the 412 MW SJVNL Rampur Hydroelectric Project on Sutlej and the 800 MW NTPC Koldam Dam. He recalled that the agreement for the project was signed with the Soviet Union way back in 1962; successive governments did not proceed on the matter.

It began not before the Atal Bihari Vajpayee government assumed office at the Centre, and today it was complete. He also informed the assembly that the NHPC project of 520 MW called Parvati I has been inaugurated while the central government is trying all out to start the Parvati II project.