Home » In-News » Top-News » Had left my family and home to serve the nation: PM Modi

Had left my family and home to serve the nation: PM Modi 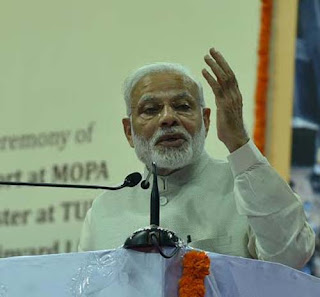 Prime Minister Modi has said that if any money has been looted in India and has left Indian shores, it is our duty to find out about it. He further added that he was not born to sit on a chair of high office, adding that whatever he had, including his family, and his home, he had left to serve the nation.

The Prime Minister, Narendra Modi, today unveiled plaques to mark the foundation stone laying of Mopa Airport, and an Electronic City at Tuam, during a function at the Shyama Prasad Mukherjee Stadium in Goa.

The Prime Minister also unveiled plaques to mark the inauguration of Infrastructure for building Mine Counter Measure Vessels; and inauguration of commencement of Construction of five Coast Guard Offshore Patrol Vessels.

Speaking on the occasion, the Prime Minister began by congratulating the team which enabled India to successfully host the BRICS Summit in Goa a few weeks ago. The Prime Minister appreciated the State of Goa, for its progress.

Talking about the Airport project, the Prime Minister said he is happy that the promise made by former Prime Minister Shri Atal Bihari Vajpayee is being fulfilled. He said this will benefit Goa, and give an impetus to tourism.

Referring to the Electronic City project, he said a digitally trained, modern and youth driven Goa is being shaped today, which has the power to transform India.

Referring to the recent decision of the Union Government on demonetization of Rs. 500 and Rs. 2000 currency notes, the Prime Minister said that on 8th November many people of India slept peacefully, while a few are sleepless even now.