Faulty implication of demonetization has affected all spheres of life: Congress 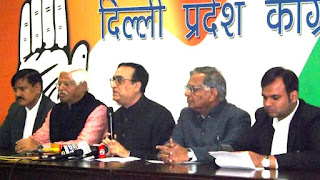 Congress leader and Delhi Congress Chier  Ajay Maken said that more than one month has passed since the demonetization drive began. The faulty implication of demonetization has affected all spheres of life but the daily wagers, ad-hoc employees and informal sector labour are the biggest sufferers, and this section constitutes a huge working population in Delhi.

Quoting the NSSO survey on Employment, Shri Maken said that as per the 68th Round between the year 2011-2012, the working population of Delhi was 57.06 lakhs. “The data of Directorate of Employment, Delhi Government reveals that the total number of workers in the organised sector was 8.43 Lakh in 2009. This figure has remained almost consistent in the last one decade”, Shri Ajay Maken noted.

Had left my family and home to serve thenation: PM Modi

Maken said that he is extremely concerned on two counts. First, the overwhelming majority of this 48.63 lakh unorganised/ informal work force is the first-generation migratory population. Secondly, the reports of reverse-migration have started pouring in. This is a real danger.

“It is because of these un-organised/ informal work force, that the Delhi sustains itself. They are the providers of affordable services and labour. In a way, as much un-acknowledged, they are the real lifeline of the National Capital”, added Shri Maken.

Maken said that the major projects in Delhi have come to a stand still as the labourers are not getting their daily wages due to cash crunch. He said that the labourers who used to gather at different chowks have disappeared.  The daily earning of rickshaw pullers have also come down sharply.