Home » In-News » Top-News » Need to give some tax rebate to shopkeepers to use digital means: Jaitley

Need to give some tax rebate to shopkeepers to use digital means: Jaitley 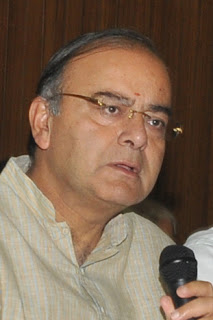 The Union Finance Minister Shri Arun Jaitley said that the current Financial Year 2016-17 is not a conventional year as many major reformative decisions have been taken during the year. He said that there is need for out of box thinking as series of steps are required about what the Government can do and what the banks can do.

The Finance Minister Jaitley was making his Opening Remarks at the Pre-Budget Consultative Meeting with the representatives of Banks and Financial Institutions. The Finance Minister further said that the banking sector is the backbone of our economy. He said that he doesn’t see any serious challenges as far as structural changes are concerned.

After that number of suggestions were given by the representatives of the Bankers and FIs for consideration by the Government.

Post -demonetization, liquidity in banks have improved. This may impact saving deposit rates. This makes senior citizens more vulnerable as their income is adversely affected. So, some sort of exemption need to given to them under the Income Tax Act so that they have a decent income through their deposits.

After demonitisation, the Budget should focus on boosting the consumption to create demand. Urban Local Bodies should be encouraged to collect Property Tax and Utility Tax through online means. Finance Bill should mandate that all wages should be paid by the employers through banking channel or digital mode. Many shopkeepers don’t sell using digital means as they do not want to pay taxes. So there is need to give some tax rebate to these shopkeepers to use digital means and for better compliance. Same way, consumer may also be given a tax rebate at the year end if  his digital purchase is more than a certain amount.