Sports Round Up 2016: Major Achievements

0 In-News, Sports-News
A+ A-
Print Email 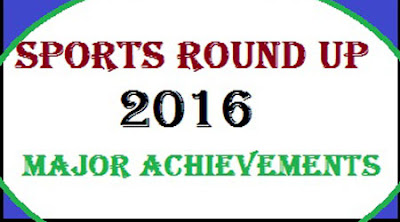 Year 2016 remained a spectacular year on the ground of sports. It is either Rio Paralympics from early of the year or the recently India’s victory in the Hockey, the year was full of achievements in the many events of the sports for the country. These are the highlights for the sports in the year 2016 for the preparation of the Competitive Examination.

Participation of Athletes ensuring and making all arrangements for participation of the largest ever contingent of India in Olympics / Paralympics 2016 in Rio. India won 2 medals in Olympics (1 silver and 1 Bronze in Badminton and wrestling respectively).

12th South Asian Games were successfully conducted at Guwahati and Shillong in February 2016 India’s regional supremacy went unchallenged with a record-breaking haul of 308 medals. India’s final tally stood at 188 gold, 99 silver and 30 bronze medals. It was a massive jump in medal count for the Indians, who had won 175, including 90 gold, in the previous edition of the Games in 2010.

Run for Rio on 31st July, 2016 was organized to create awareness among masses about Rio Olympics and to convey wishes of the country-men to Olympians and Paralympians participating in Rio for 2016.  The same was flagged off by Prime Minister.

Consultation with Elite sports persons:  First ever Round Table conference was held with Khel Ratna Awardees, Dronacharya Awardees and other eminent sports personalities/athletes in Vigyan Bhawan on 3rd October, 2016 on the performance of India in Olympics / Paralympics 2016 and action plan for future.

Indian U-18 Men Hockey Team won gold in 4th at Dhaka Asia cup beating Bangladesh in the final at Dhaka.

All India Meeting of grassroots level officers of SAI at different SAI Training Centres spread across India was held on 17th October, 2016 to know about the issues relating to the Centres.

Khelo Football:  Subroto Mukerjee Sports Education Society (SMSES) has already organized a pilot programme “#Khelo Football”, for development and popularization of football. Through this programme, talents from the remote areas has been scouted and one team each in the Junior Girls and Boys has been formed and given Wild Card Entry in the 57th edition of Subroto Cup Football Tournament 2016.

Mission 11 Million Programme: FIFA U-17 World Cup is being looked at as an opportunity to popularize the sport of Football amongst youth. Following the call of Prime Minister, the Department of Sports has taken a series of steps to popularize Football throughout the country. After several rounds of discussion with FIFA, AIFF, KVS, CBSE, Subroto Mukerjee Sports Education Society (SMSES) and other stake-holders a ‘Mission 11 Million programme’ has been formulated to be launched in collaboration with AIFF and FIFA in about 30 cities across the country.

Launch of a new scheme ‘Khelo India - National Programme for Development of Sports’:  A new Central Sector Scheme namely ‘Khelo India’ was launched from the financial year 2016-17 onwards. The scheme has three components viz., competitions from district level upwards, talent nurturing and development of sports infrastructure from Tehsil  level onwards and funds have been provided to various states for conducting Sports competitions from district level upwards.

Rs. 5 Crores have been released to J&K under Khelo India Scheme for organising village level sports competitions in sports disciplines which are popular in the valley so that young children can be engaged in productive activities.

National Sports development bill has been sent to Legislative department for approval and is likely to be introduced in Budget session of parliament.

Direct Benefit Transfer : Matter has been taken up with all the States with the request to issue requisite instructions to create a DBT portal in the Department of Sports/State Sports Councils of the States/UTs to make payments to the beneficiaries through RTGS/NEFT/PFMS and create a digitization of the beneficiaries database, obtain and seed Aadhar card details of beneficiaries and include the details of payment whether it is in cash or in kind.